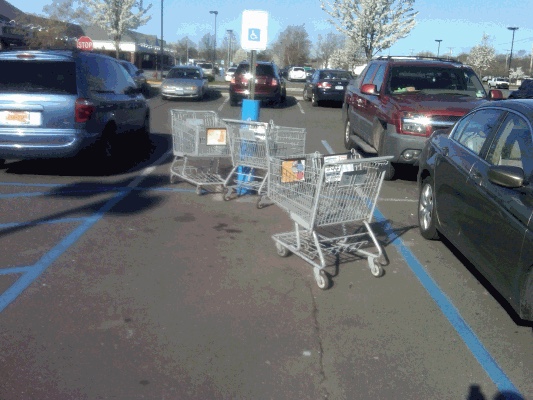 Have we become a culture of observers versus doers?

I like to come up with simplified ways to think about and test theories. A pet peeve of mine is not doing seemingly simple things because “it’s not my job”. My feelings have been there about this as far back as I can remember, probably something instilled in me from the Marine Corps… I don’t really know. The fact of the matter, and I say it often, is that most people spend more time complaining or dodging a task than if they had just done the task…. Why does it bother me? I guess because I see one small, seemingly simple task and view it as a representation of a bigger problem, a society that looks the other way as opposed to a society that strings together a serious of small, yet conscious acts to make the little world better.

I pulled into Wal-Mart today to purchase some supplies for our upcoming Allagash Wilderness Waterway trip. Upon pulling in I noticed a parking space near the front of the side entrance that was occupied with a shopping cart that was half on the dirt mound and half in the parking space. On my approach from the back of the parking lot I watched several cars drive past attempting to pull in and they eventually moved on after realizing there was not enough space to pull in without risking hitting the car or leaving their rear bumper out in the travel lane. I thought about crossing the travel lane and taking care of the cart myself, but saw that there were both a “shopping cart retrieval employee” walking towards that direction (presumably headed to round up carts from the parking lot) and a person in the parking space next to this one unloading groceries. Given these two people were surely headed to solve the problem as soon as they finished what they were doing, I dismissed the thought and proceeded into Wal-Mart to do my shopping.

Upon existing the store, I rolled my full cart towards the back of the parking lot and to my disbelief, the cart was STILL there! Moreover, there were two NEW cars on either side of this space… Surely people had run into the same observation as me? Why had no one solved this problem with almost no expense of energy or time? The answer, I believe, is systemic in our current cultural psyche… “It’s not my problem/job” has become the all too easy mindset. It has the power to destroy families, relationships, jobs, and just about any social relationships you can think of. It’s sad, but it’s there. It demonstrates disconnectedness from the rest of society, and the slippery slope to lacking empathy for others.

The Consequence of the “Not my job” mentality

Why is this relevant? Just last week one of our transitional students obtained a new job. In one of our conversations about how the new job was treating him, and how they managed his breaks he stated, “They said I can take as many breaks as I want”. I reeled at this for two reasons, 1) This particular student struggles with productivity, and 2) For someone who struggles with productivity, statements like that are the single greatest invitation to justify in their mind the “not my job/problem” thought process. Needless-to-say, the conversation shifted to “how to be the best employee someone has ever had” talk. My advice was to ask his manager and fellow employees if he could do anything to help them BEFORE taking a break.

In a relationship, if you see your significant other struggling to keep up with life, do you not do the dishes or that load of laundry because it’s not “your job”, do you not cook dinner when they are running late from work after a stressful week because “it’s not my night”? How far does this mentality go? Do you drive past an accident no one else has arrived to yet and say to yourself “I’m not getting paid to be an EMT”? Are you a low performer at work because you don’t do any work that isn’t in your job description, and you weren’t specifically told to do? It’s a slippery slope and it all starts with the shopping cart in the Wal-Mart parking lot. I implore you to do more work that isn’t your job, more work that you don’t get paid for, and more work that in no way improves YOUR life, but that of someone you love, or better yet, a COMPLETE STRANGER.

I grabbed that shopping cart when I was going to return mine, just as an old couple, probably too proud to park in a handicap space pulled down the driving lane. I signaled to them the universal “here” and “one second” sign language, they waited patiently as I removed the shopping cart and returned it to its rightful place, they waved thankfully as they pulled in and I drove off.

The moral of this story? PUT YOUR DAMN SHOPPING CARTS BACK PEOPLE!… Just kidding, the moral of the story is whatever you want it to be, to me it’s the concept that your own life improves as you improve the lives of others, even in small ways, call it karma, call it the universe speaking to you, call it what you want… Just put back the “shopping carts” in your life.