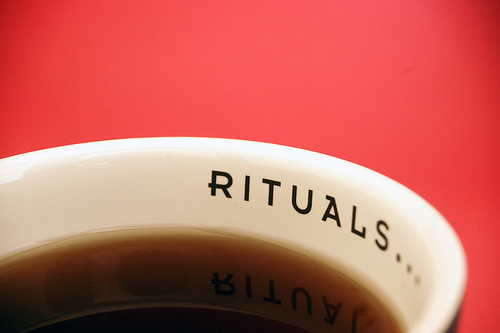 The Importance of Rituals

Structure as a path to wellness

“Ritual: A religious or solemn ceremony consisting of a series of actions performed according to a prescribed order.”

Even avoiding the religious aspects of the term ritual, it is clear to anyone who identifies rituals in their life, positive or negative, how powerful they are.

I identify a ritual as a behavior or activity that you do with consistency and yields similar results every time.

-Some simple rituals I have in my life as an example:

Brushing my teeth: It sounds stupid, but if I don’t do the following events in the morning, in the exact same order, I get completely disorganized in very frustrating ways.

Wake up. Use the bathroom. Brush my teeth. Take the dogs out. While the dogs are outside, feed the cat, start coffee, get dressed, adjust temperature for house via pellet stove or furnace, open blinds, make travel mug of coffee, let dogs back in the house, pack any special items I need for the day depending on what kind of work I am doing, grab keys, sunglasses, and wallet from the kitchen counter, close inside doors to isolate dogs in kitchen and bathroom, check that I have all items I need for the day.

When you read that does that sound just like most of your mornings? I’m sure it’s pretty similar. For me, it’s amazing how one little thing out of order in that morning ritual causes my morning to be off. I mentioned the brushing my teeth part of that morning ritual, here is how my order being messed with screws the whole thing up.

-A recipe for a terrible morning

One morning I woke up to an immediate barrage of texts requiring my attention at the ranch. I began responding to these before I even got out of bed. During the process of letting the dogs out and returning to the house, I was distracted by texts, felt rushed, and got dressed… I skipped the brushing my teeth step, which resulted in me, later in the morning, being half way to work and realizing I had missed that step, “Awesome, I’m gonna have terrible breath until I can get to the store and buy toothpaste and a toothbrush”… I also reached down for my coffee in the cup holder, it wasn’t there! Damn!!… Then the realization… The coffee pot is on! Damn!… Then the realization… I didn’t close the dogs in the appropriate area… One of our dogs is a rescue with no house training… And prefers to go potty on rugs if left to her own devices. Oh Joy…

Positive rituals become a positive force in your life if you give them time to be. My morning ritual became entrenched in my mind due to the necessity for efficiency in getting out of the house in a timely manner. My study “habits” or “rituals” in undergraduate and graduate school came as a result or analyzing my deficiencies, and adapting my approach to allow for more free time in my life and improve my GPA.

A young man we worked with a few years ago, who struggled with substance use pointed out to me the pitfalls of an entrenched negative ritual in his life that nearly resulted in relapse for him.

“I couldn’t have ever imagined that after months of sobriety I would have actually been tempted… but I was, and it was over the stupidest thing ever”. This young man struggled with “polysubstance” abuse, but one of his biggest struggles was around drinking alcohol, it proved to be detrimental in all areas of his life. He went on to say “I was back home visiting family and drove past a convenience store that I went to a million times. I needed to get gas, stopped to fill up, and went in to pay, I walked over to the cooler and without thinking grabbed a six pack of tall boys (16oz beers), I literally stood there paralyzed with the beers in my hand and cooler door still open realizing what I had done, I didn’t mean to, but I had done this exact routine so many times I did it instinctively. I stood there for what seemed like forever thinking about drinking the road sodas (beer for the ride home) I started justifying why I didn’t have to put them back in the cooler and that I could have a few beers just this once”.

Luckily, due to some serious sobriety planning and general life skills that he had learned mostly the hard way, he put the beer back in the cooler, paid for his gas, and didn’t look in the rear view mirror. He actually called me before he got back home and told me the story, then called his Alcoholics Anonymous sponsor. Let me tell you, I wish this is the way stories like this ended that way, but sadly not all do.

His rituals that he had developed driving back and forth from work for years were so entrenched in his life that months after the extinction of those rituals, they continued to manifest subconsciously.

I continue to be amazed at how helpful or damaging rituals can be in our lives, how much comfort they can provide to those who find themselves lost, what amazing pillars they provide when we face change in our lives, and how detrimental they can be if you don’t break the bad ones.

Do you have any examples of rituals, good or bad?