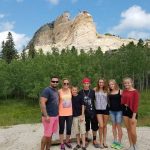 Melissa was born and raised in Maine, right in the Newport area where Northwoods began. Melissa comes from a large family; she is the oldest of six children, and a mother to five teenagers who do not think she is cool, even though she insists she is!

Before Melissa began working for Northwoods, she was a Hair Stylist for 9 years. She loved her job, but after her husband Devin joined Northwoods, she started “helping out” where she could, morphing into the needed roles. Eventually, it led to be her full-time job where she wears many hats, from (but not limited to) the unexciting administrative paperwork, meeting and talking with families for new admissions (the best part of her role at Northwoods), to the ever-demanding task of keeping Devin under her command.

Outside of Northwoods, Melissa enjoys spending time with her family, whether it be road trips, hiking, camping, participating in an occasional mud race, exercising or just hanging around being lazy!

Back to Meet Our Team

Our mission at Northwoods is to meet people where they are at, allow for a safe, healthy environment, and help assist each individual to achieve their own goals make the necessary changes that will allow them for successful and fulfilled life.