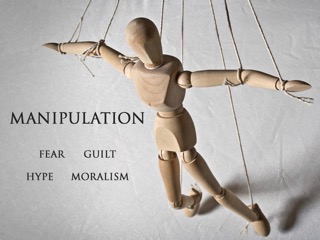 A force for evil… or good?

I have to confess. I have tried to write this blog a few other times, each time I have run into problems writing it. I simply have difficulty adequately making my argument in written form. It’s mostly because it’s a hotly debated topic that some people simply disagree with my stance on.

Often times in our society we find people to be manipulative in nature. When we identify them as being manipulative they are automatically classified as “bad people”. Generally, this is not an undeserved title because these people often go about their lives getting their needs met at the EXPENSE of others. In doing so, they have crossed a societal line that we are told not to cross. It’s also important to note that often times when manipulation is taking place, the party getting their needs met is covert in their nature. The party being manipulated often does not recognize it is being done, and if they do, feels very “used” by the manipulator.

In a perfect world we find ways to mutually have our needs met. In solving a problem this way both parties have their needs met in a way that does not inherently have a negative impact on one party and a positive impact on the other. Both parties truly benefit MUTALLY. It’s also important to note that in mutually beneficial social arrangements, both parties are often very vocal about their goals, therefore neither party feels abused or manipulated because it has been discussed.

The difference is subtle, but profound.

So why the discussion around this topic?

Surely everyone at this point would like to be on the side of “good” and engage in only mutually beneficial social interactions. Right?

Well, the reality is that as people, we have a very large spectrum of strengths and qualities. The fact is there are quite a few people who lack the social skills necessary to adequately advocate for themselves in a mutually beneficial manner. Many times, they are people who have developed a socially negative way of getting their needs met. They have learned to manipulate people and situations to do so.

When I mention someone who is highly manipulative towards their peers, parents, and systems of all kinds what is your mental imagery of this person?… Be honest… Most people picture someone who has no compassion/empathy for others, is a “spoiled brat” and has little to no hope for the future because they “burn their bridges with everyone”, and can’t be trusted.  In many cases you wouldn’t be far off the mark. However, it’s important to recognize that generally speaking, people do not CHOOSE TO FAIL. They simply develop, the best they can, means to navigate life. Many people with Asperger’s or Autism Spectrum diagnosis have difficulty reading social cues and sometimes have a hard time recognizing the impact of words and actions on others, many times taking the most direct path to getting their needs met… With no intention of harming others in the process. Many individuals with personality disorders and some trauma have developed defense mechanisms that get their needs met, but cause them to put the needs of others secondary to their own.

I met a young man who Devin and myself quickly identified independently as having Narcissistic, Borderline, and Anti-Social traits. In short, he was outwardly cruel to others, manipulative towards people and systems, and seemed to lack empathy. Observationally, it seemed that he would manipulate nearly every situation he was exposed to, getting his needs met at the expense of others.

After building some rapport, and hearing his story it was revealed that he was bullied as a child, and that he realized at that age that he could manipulate the situation by becoming the aggressor. Making fun of other kids, and effectively taking the spotlight off of him. Flash Forward to adult life, and this defense mechanism became enmeshed with his personality, which was quickly becoming Anti-Social in nature. I tell this story because I think it’s important to recognize that behind nearly every maladaptive trait in an adult is an adaptive defense mechanism that developed with the purpose of getting the person’s needs met the only way they knew how. Again, people do not generally “Choose to Fail”.

I like to use the saying “You get more flies with honey than you do vinegar” to emphasize to people who manipulate that they simply need to tweak the way they manipulate. You see, I have no interest in telling people they are wrong/bad for manipulating people and systems. It’s actually a very useful trait and to some extent we all do it. The problem is that they do so in a way that ultimately does not help them because it is done poorly and has no semblance of helping others in the process. The trait must be harnessed so it actually serves them and others.

Manipulation in our daily lives

I manipulate on a daily basis… I constantly spend my days identifying what my needs are, what the needs are of those around me, and creating a method to have both needs met in a way that will be most receptive. I don’t care what anyone says, that’s MANIPULATION. As far as I’m concerned it’s a really useful skill in navigating the social nuances of our daily lives.

Think of some little manipulations in your life… Can you think of ways you don’t do so well? Ways you can do better?

What are your thoughts on Manipulation? Have you ever been manipulated? Manipulated a person or situation in a bad way? A good way?